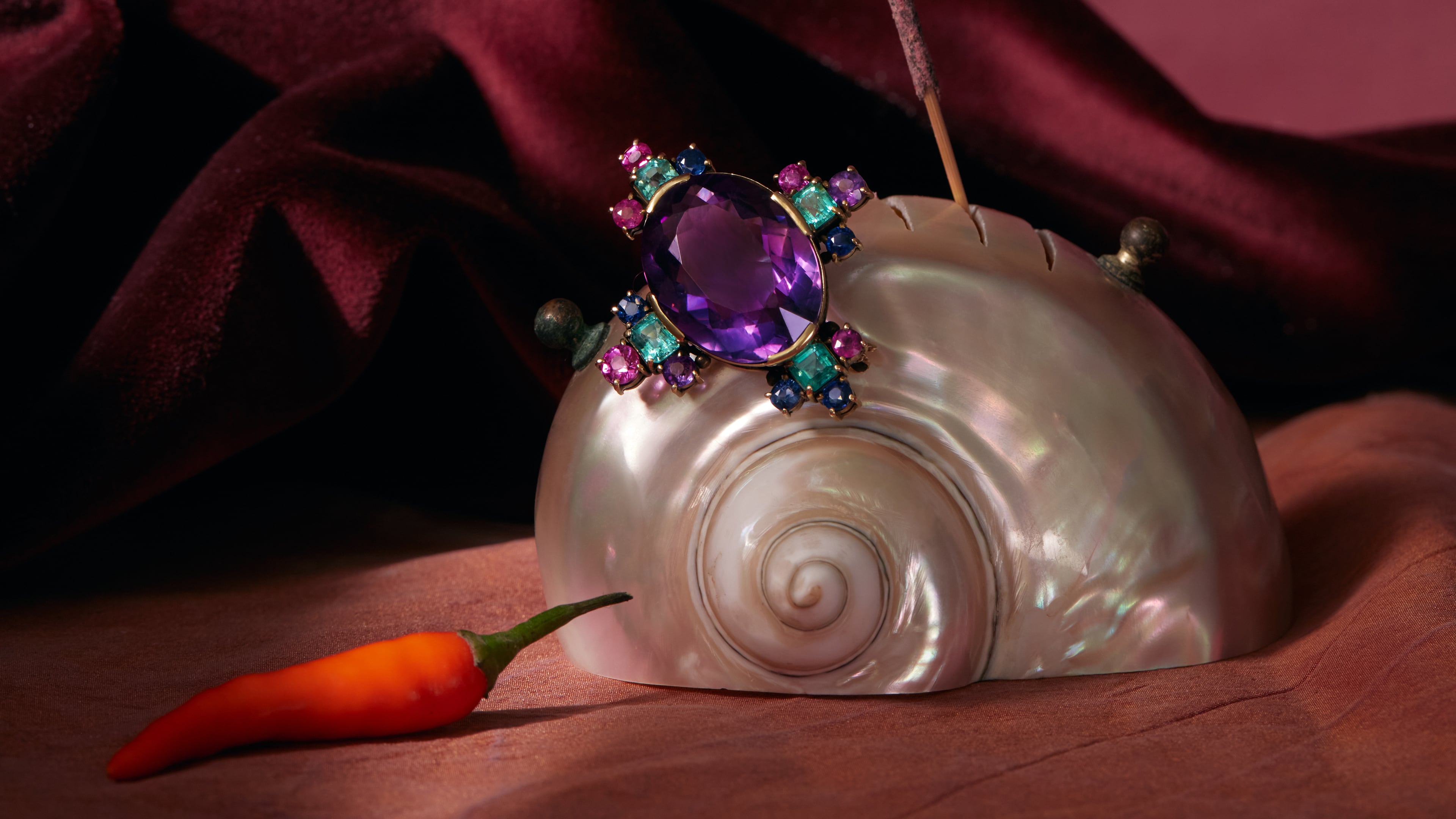 Castello & Rossi is a collection of fine collectible antique and 20th century jewels curated by a specialist lens. Offering a modern edit of coveted historical and vintage treasures, each jewel is scholarly chosen for its design and origins, as well as its ability to speak with relevance to the modern jewelry collector, regardless of antiquity or age.

Built upon founder, Anellie Manolas’, longstanding affinity for antique and 20th century jewelry, the collection is driven by her engagement in the dialogue which she feels exists around old jewels, “When I pick up an old jewel, I feel awe, curiosity and deep sentimental arousal. For me, the true value of a jewel is, at its core, in the story that it tells.”

As co-collectors, Anellie Manolas, and Senior Consultant Susan Abeles, together offer 40 years’ experience valuing jewels for the world’s most prestigious auction houses, handling some of history’s most storied jewels. Between them, they have curated important jewelry auctions in the UK, Middle East, Australia, Hong Kong and North America, travelling globally to source the jewels they sold. Each possessing a deep passion for jewels, they bring a considered eye to jewelry collecting, and an instinct for unearthing special pieces in far-flung places. The jewels offered by Castello & Rossi represent Anellie and Susans’ formidable understanding of period jewelry, as well as their access to important private collections and estates around the world.

"The client removed a small package of tissue paper from her bag, carefully unfolding it to reveal a simple, but elegant Art Deco ring centering on a small ruby of the most intense red hue. Inherited from her grandfather, a man of Dutch heritage who had served in India during the early 1800s, she believed the ruby to be important but had no understanding of its worth. I knew instantly that the ruby was likely Burmese, untreated and that its color and fire was the most spectacular of any ruby that I had seen. The ruby was described by one colleague as a ruby that sings. It did just that, to the world when it was auctioned several months later as an antique, unheated Burmese ruby of true pigeon’s blood hue. It tripled its estimate and was sold to one of the most important jewelers of the 21st century halfway across the world. After the auction had concluded, the client approached me and explained that one of the staff had to find her a chair to sit on as the ruby rocketed toward its dizzying final price. She handed me a small gift of appreciation and thanks. She also went on to tell me that, on the evening of the auction, she would take a taxi back to her hotel, rather than ride the bus, as she could now afford to do so."

Castello & Rossi was a natural evolution for founder, Anellie Manolas, who sought to put together a jewelry collection that represents her deep personal connection to, and respect for period jewels and those who covet them.

Her work as a jewelry valuer and collector is one steeped in connection - both with the pieces she sources and with the joy she derives from connecting clients with special jewels, while broadening their awareness of the stories and histories associated with them.

‘What draws me to a piece is, of course, its design and its quality, but equally I am driven by the desire to unearth the history behind each jewel I choose. For me, jewelry has its own language and often, a jewel will speak to you on an intuitive level. It will tell you who it is, who it was or who it might be. It is this dialogue that, as specialists, we grow to understand and this story which, as collectors, we wish to pass on to those who we buy for. When I see a special jewel, sometimes previously unseen or unnoticed, I feel charged with the responsibility to bring it into the light again. My determination to identify its origin takes on almost obsessive proportions - I dream in jewels, that’s how seriously I take this passion that has become my work.”

As a graduate gemologist of the GIA, Anellie’s career started in 2009 at Christie's in London, working as a cataloguer and administrator for Important Jewels sales in London and in Dubai. There she found mentors who imparted invaluable knowledge and experience to her, sending her on her way to become a specialist in her own right. Joining Bonhams Sydney as a junior specialist, she soon took over as the Head of their Australian jewelry auctions, winning collections which elevated the profile of Australia as a sourcing ground for important jewels that could be sold at any major international saleroom. Relocating to Hong Kong in 2015, Anellie gained invaluable experience as an International Specialist at Phillips, selling jewels to clients in Hong Kong, China and South East Asia. Branching out on her own in 2021 as a collector, she continues to develop her passion for jewels and her desire to make accessible her ‘finds’ to both the seasoned and new collector.

"Having come from a home steeped in mid-century American design and art, my mother - a professor of Art History and an industrial designer - was an important and subconscious force that both introduced and exposed me to ideas on design and theory, manufacture and historical reference. My first jewelry awakening came when I was at Doyle. My position changed from furniture inventory and appraisal work to the jewelry department due to an inhouse theft problem. With little, to almost no academic knowledge of jewelry, and having learned and worked with furniture and decorations, I felt lost. Yet instinct, my mother always said, is an intuitive guide. Shortly thereafter, I found a pair of bracelets in a box destined for melt. Oddly fascinating and uniquely beautiful, I retrieved them for study. I was inexplicably drawn to their non-classical beauty - they were fabulous, standouts, but lacked a signature. Trusting my instinct, acknowledging how special they were, I researched - identifying their hallmarks for country of origin, discovering workshop marks for place of manufacture, but remained stumped by the lack of signature. With more information, I discovered that they were created by French designer, Suzanne Belperron, circa 1935. I read about her evolution as a jewelry designer and how political, economic, intellectual and social influences both shaped her work and governed the materials she utilized. Their bold sculptural forms and their simple color palette of bicolored citrines, set in a three dimensional landscape were both intoxicating and spellbinding. They represented a woman’s voice. I still see these jewels - their imprint is as fresh today as was it when I first found them."

In her role as Senior Consultant to Castello & Rossi, Susan Abeles brings passion, an astute understanding of, and an extensive 25-year background in the jewelry industry. Growing up in a family with a true appreciation for design and 20th-century American art, Susan’s own interest was piqued at an early age - in the origins of art, its makers, and background stories. Her pull to the beauty and  backstories of vintage jewels was, in many ways, a natural extension of her family's eternal enthusiasm for art and its rich contextual history.

Susan’s natural collector’s eye, which has evolved and deepened over the course of her formidable career. Honed within some of the most reputable jewelry businesses in the industry, it is here that both Anellie and Susan find deep synchronicity in how they approach their work, the way in which they source and select pieces for their clients, and in how their passion for exquisite jewels continues to evolve.

Post university, where her studies focused on behavior and chemistry, Susan took her first job with William Doyle Galleries, Inc. While her role started in the bookkeeping department, she swiftly progressed to the Appraisal and Consignment Departments, where she learned about furniture and silver, before then moving into the Jewelry Department. After fifteen years at Doyle’s, Christie’s offered Susan a role running one of their New York Jewelry Departments, where she worked and learnt for some seven-plus years. From there, Susan found herself working for the much revered, international, premier jeweler, Lee Siegelson. A decade later, Susan moved back into the world of auction with Bonhams, where she worked as the Head of Jewelry in the Americas for seven and half years, before joining Phillips to help relaunch their American Jewelry Department.

Over the course of her career, Susan has become a longstanding, esteemed member of The Women’s Jewelry Association (WJA) and the American Society of Jewelry Historians. It is here, as well as in her capacity as guest lecturer at a number of regarded institutions - Art of Appraising Jewelry at the School of Continuing Professional Studies at New York University, Jewelry Camp, Christies, Doyle and Bonhams, as well as at numerous trust and estate events with the Heckerling Institute of Estate Planning – that Susan’s expertise is so highly regarded and sought after.

As a licensed auctioneer, her remarkable reputation has seen her work closely with a number of revered families, as well as handling property estates for the likes of Elizabeth Taylor, Gloria Swanson, Rock Hudson, Lauren Bacall, Jackie Collins and Dewitt Wallace.

Whether it is curating collaborative exhibitions and events, hosting panel discussions and book signings with industry greats, or being interviewed by some of the world's most respected publications - The New York Times, Financial Times, Rapport Magazine, Forbes and Robb Report amongst others – it is Susan’s unique ability to both understand and retell the stories behind individual pieces that brings them to life. This love and in-depth understanding of jewelry is what inspires and guides her when helping her clients select pieces that are perfect for them.