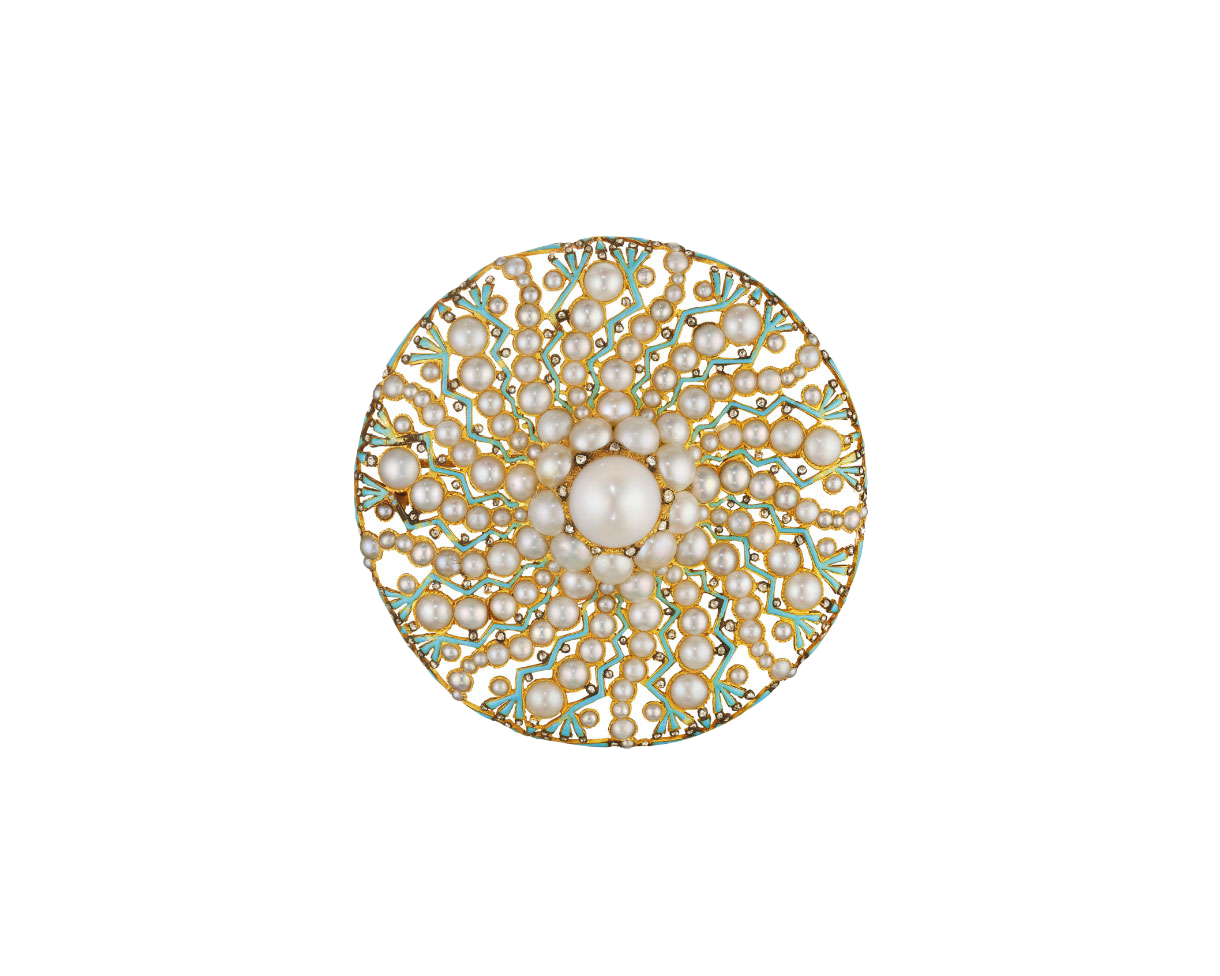 Jewel In Focus: A Rare Antique Pearl Enamel and Diamond 'Hupa' Brooch, by Paulding Farnham for Tiffany & Co., Circa 1889

In early December 2022, Christie's New York sold a rare Native American-inspired 'Hupa' brooch by Paulding Farnham for Tiffany & Co., circa 1889. Susan Abeles considers why this brooch is so important to the landscape of works by Paulding Farnham for Tiffany & Co. and to the history of American jewelry at large.
Susan Abeles, Senior Consultant
December 30, 2022

George Paulding Farnham was a little-known genius.  At the 1889 Paris Exposition Universelle,  Farnham garnered universal recognition and acclaim for his superlative collection of twenty-four enameled and gem-set orchid brooches which were singled out for their originality, design, and manufacture.  These life size, perfectly replicated exotic flowers appealed to wealthy clients interested in horticulture with a passion for growing these fragile specimen plants.

Native American artifacts inspired another collection that Farnham produced for the 1889 Exposition.  While Tiffany previously offered Native American arts and crafts, dress, accessories, and other objects, it was not until 1875 that the Native American influence appears as figurative decoration telling a pictorial story on monumental pieces such as candelabra and trophies.  Farnham reimagined the Native American inspiration and focuses on the culture.  He elected to utilize the stylized geometric patterns that appear on blankets and baskets, shapes and forms of clay vessels are copied, and basket weaving techniques are mimicked and expressed in the silver, gold, enamel, and jeweled objects which he creates. 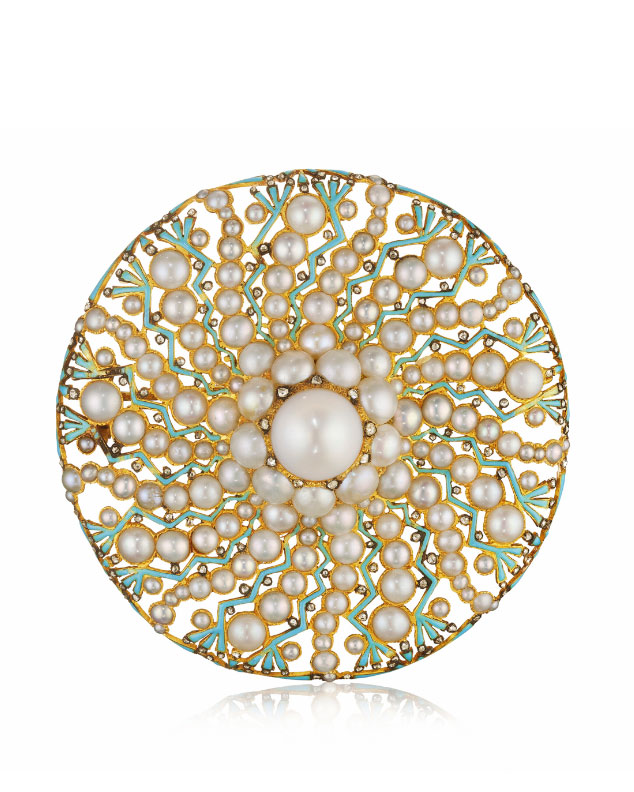 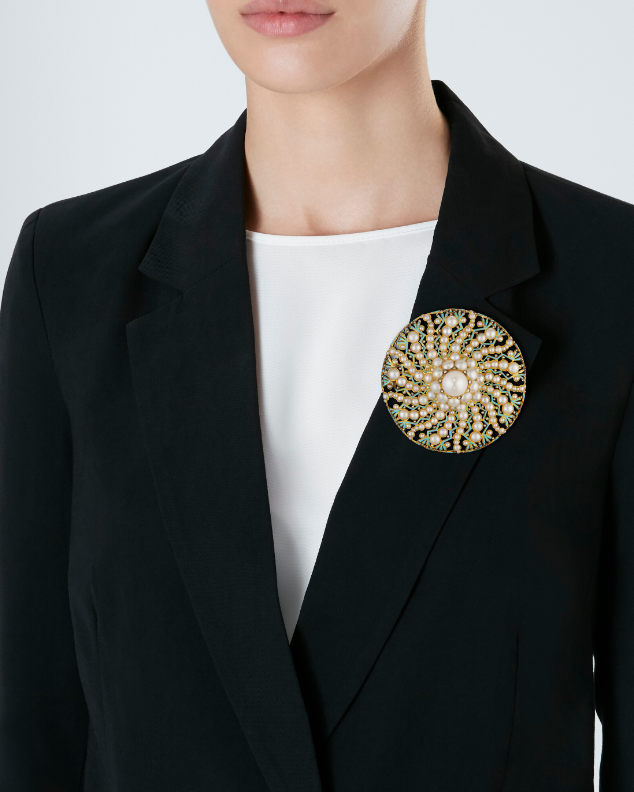 This “Hupa” brooch is listed as for the exposition as, “Brooch, Shaped after the decoration of basket work of the Hupa Indians, California.”  The Hupa, a northern California people that inhabited an isolated valley that abounded with resources. The Trinity River runs through the valley and was a large part of the culture.  Salmon and acorns were staple foods.  Consequently, baskets were woven in a flat circle for salmon drying or cylinders to accommodate acorn storage.  Hupa basketry was sometimes adorned with a “flint” design (characterized by oblique parallelogram motifs).

The brooch modeled after a “Hupa” artifact created by Paulding Farnham appears inspired by the shape and decoration of a salmon drying basket; complete with stylized “flint” design in blue enamel.  It is possible that the blue enamel was chosen in homage to turquoise, a gem commonly found in California.  According to the entry, the natural pearls were from the Miami Valley – a region in southwest Ohio – with the Great Miami River. This is truly an American creation. The reverse of the brooch is beautifully constructed almost entirely of coiled gold and fused together and etched, likely a continuation of the basket theme. 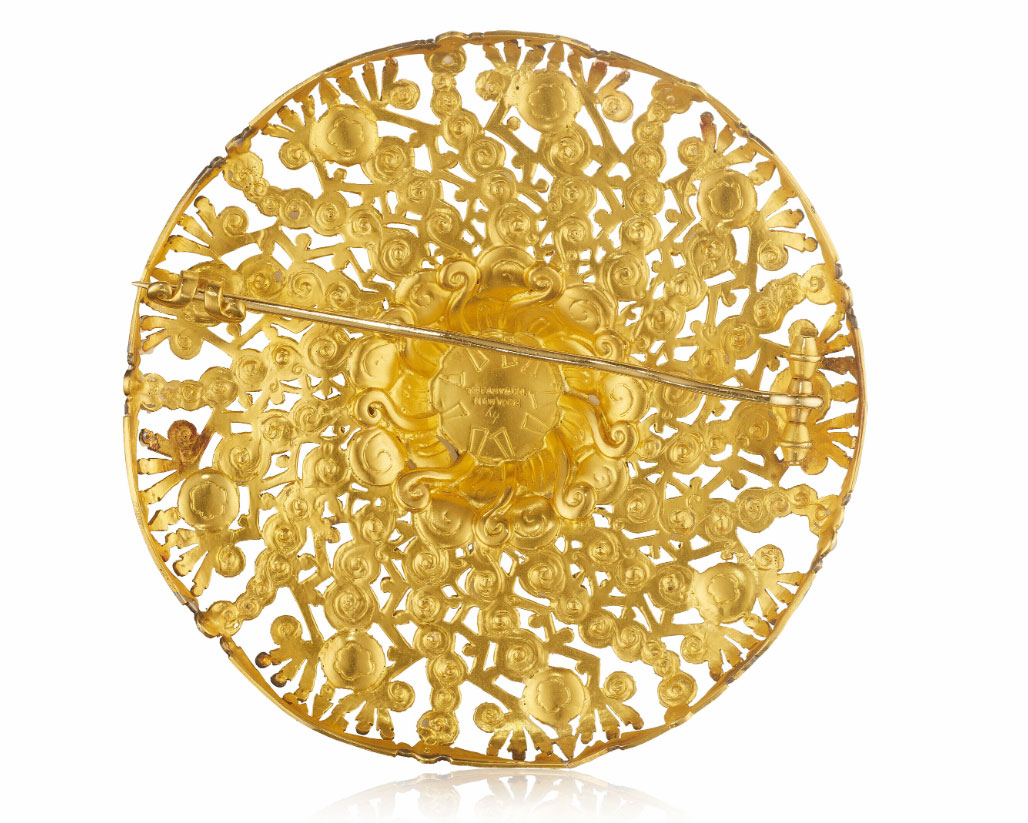 "This is truly an American creation."

"“In the twenty-two and half years he spent with Tiffany & Co., Farnham’s work won more honors both at home and abroad than any other jewelry designer of his time.”"

This is a spectacular and one of kind brooch.  It is a testament to the artistry and vision of George Paulding Farnham, a prolific artist.  While at Tiffany he used gold, silver, and copper, applied with enamels and gems, many of which were American, to created themed collections across numerous genres.  His range of design, color and texture made him a invaluable asset to Tiffany and to United States’ design.

John Loring wrote, “In the twenty-two and half years he spent with Tiffany & Co., Farnham’s work won more honors both at home and abroad than any other jewelry designer of his time.” 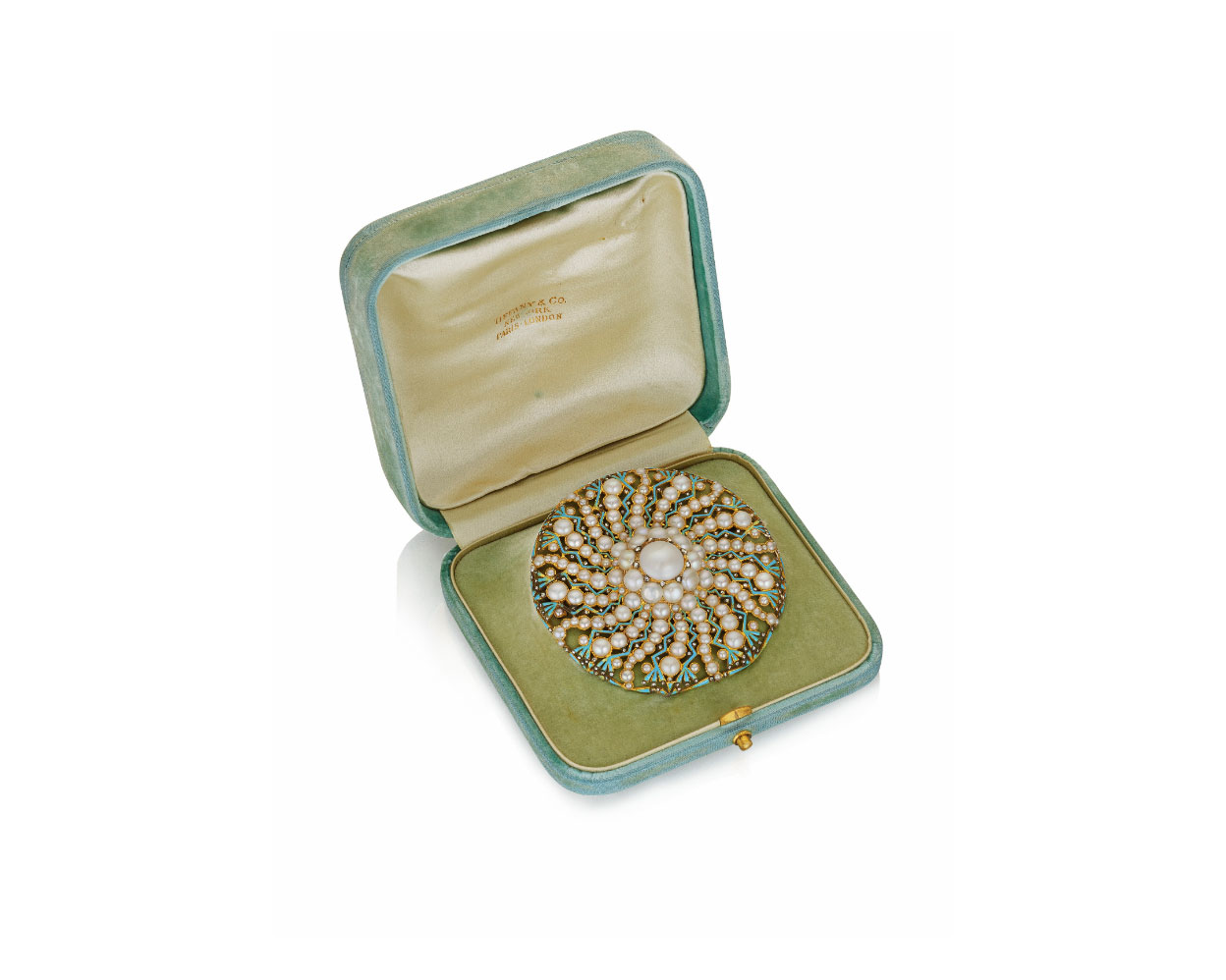