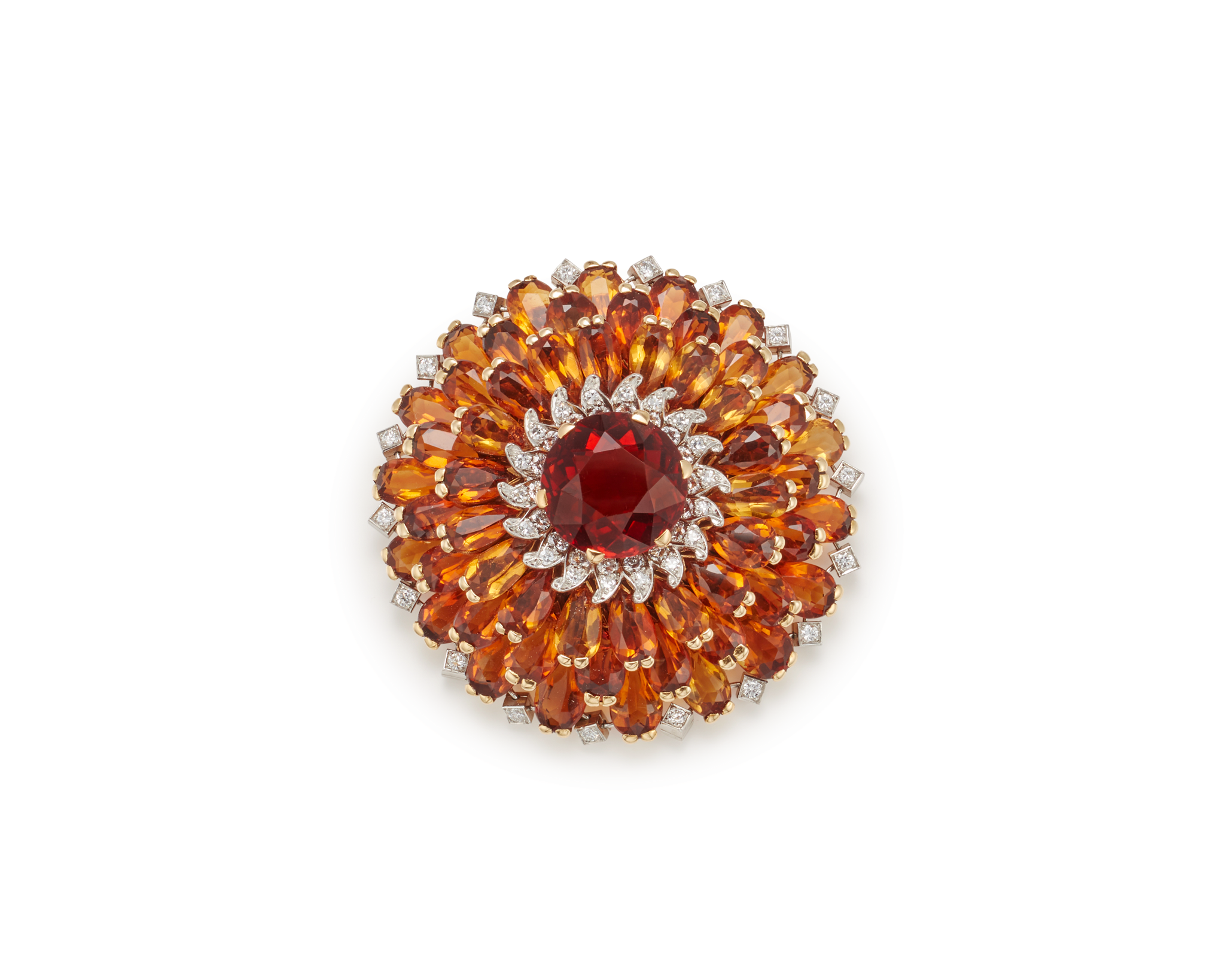 This Cartier citrine, diamond, topaz and gold dahlia clip/bracelet is an important jewel. It stands as an example of what Francesca Cartier Brickell, author, historian, and a direct descendant of Cartier, described as the Cartier tenet “‘Never copy, only create’. The idea behind it was that inspiration could and should be taken from everywhere, except from existing jewelry.” This unique jewel tells the story of Cartier: exploration of material, evolution of design, business acumen, collaborative relationships, and ingenuity.

Many consider the 1930’s to be one of the most creative times for Cartier London. The office was helmed by the youngest brother, Jacques. He was both an artist and an astute businessman, two attributes that greatly contributed both to his vision and success. Jacques and his wife Nellie traveled extensively, including several trips to India. They entertained at home and abroad, nurturing and forging relationships with royalty and the elite; and the business flourished. It is no surprise that it was the London branch that saw the lion’s share of requests to remodel the jewels of the maharajas; many of these transformations were executed in the art deco paradigm with platinum.

Fashion and jewelry were changing. Gone were loose fitting dresses with drop waists, replaced by more feminine styles that showcased curves. Similarly, gone were the popular long earrings, traditional tiaras and sautoirs, replaced by chunky bracelets, double clip brooches, unique hair ornaments and shorter earrings that showed off the softer, longer hairstyles. As these new three-dimensional forms emerged, so did gemstone choices change - and in London topaz and citrine set-in yellow gold found favor as did aquamarines set in platinum.

The modern woman wanted and got versatility. In 1934, Cartier Paris introduced one of their best-selling lines; a convertible double clip brooch that could be worn as a brooch, pair of clips or with the addition of a black lacquered band. Subsequently, the pair of clips became more fluid and, because of innovative mechanisms, could be joined in several positions thus providing multiple possibilities.

These less expensive gems – citrine, topaz and aquamarine had been acquired for years without notice from Cartier’s competitors. Cartier had quietly amassed a collection of fine gemstones at reasonable prices. In true form, Cartier had been using and experimenting with citrine and other semi-precious stones before the turn of the decade; yet it was Jacques’ foresight that prepared Cartier with this reservoir of inventory that was utilized in the 1930s.

Vogue and Harper’s Bazaar of the 1930’s featured these convertible citrine jewels in advertisements and editorials. Judy Rudoe’s book, Cartier: 1900 – 1939,pictures 1934 debutante Lady Elizabeth Paget in a parure of Cartier topaz and diamond.  According to a 1938 issue of Vogue, “The only requirement is that topaz jewelry must look as important as if it were emerald or rubies. That is the way Cartier has treated it.” Moreover, this new fashion of citrine jewelry allowed those Cartier clients that had been affected by the Great Depression to dress stylishly without the outrageous expense. 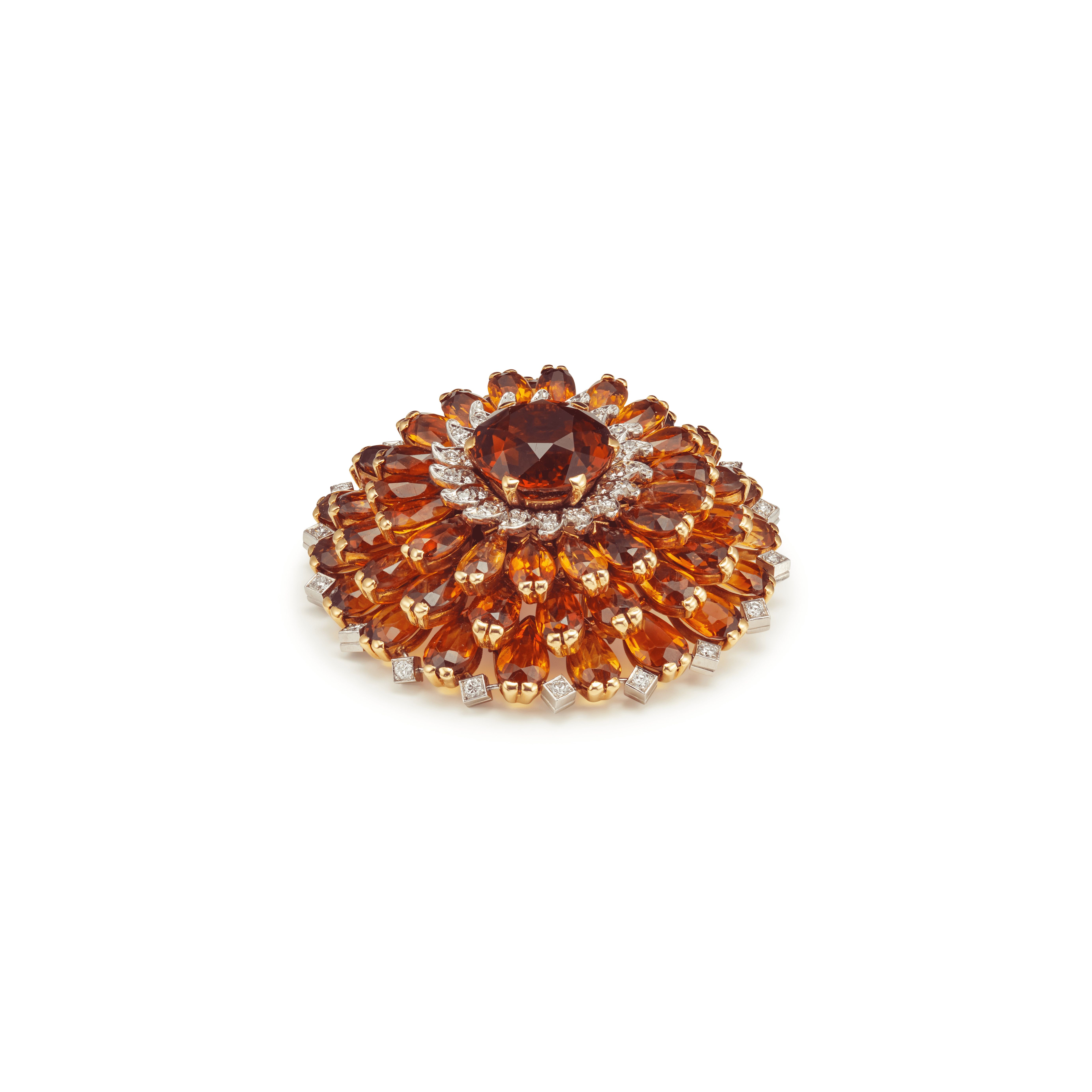 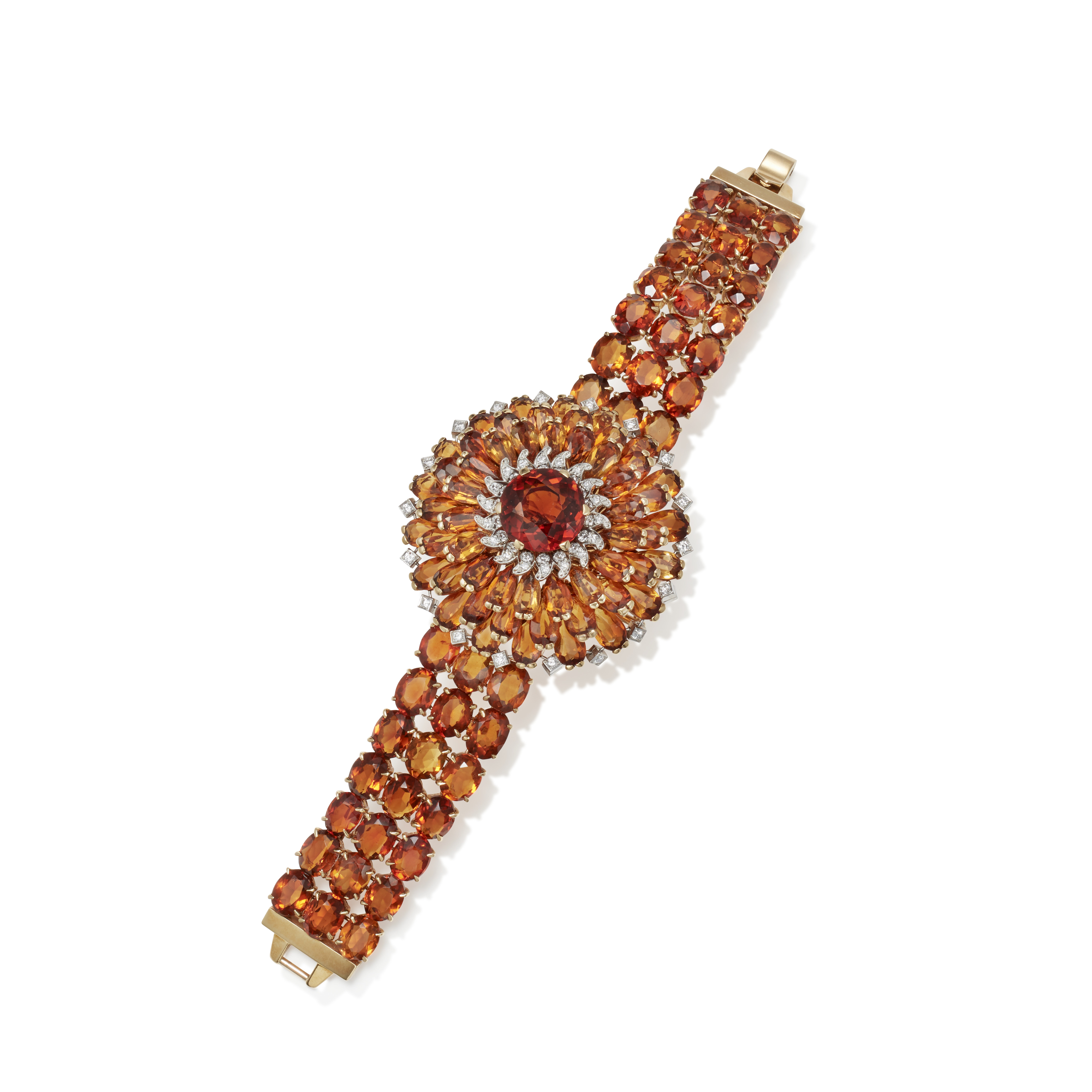 Cartier’s style and design have continued to standout; they remain highly collectible today, standing the test of time.  Previously, the jeweled creations of the Belle Epoque period used platinum, giving them a lightness and brilliance not previously seen; this new metal allowed the Cartier workshops to cut out swags, wreaths, bows and scrolls to create articulated intricate cascading mountings of diamonds and pearls that brought remarkable freshness. It was the house of Cartier that led this era with their sumptuous designs and monumental jewels having learned and mastered the use of platinum.

The subsequent art deco period jewels created by Cartier are memorable because of their uniqueness of design, superior manufacture, and use of the finest gemstones. These jeweled items were integrated with ancient fragments and inspired by exotic cultures, and in totality broke from the standard conventions recognized at that time. Exceptional examples from this era which reflect Cartier’s innovative artistry, and which are now part of the Cartier Collection include the Portique Gravity Clock, Paris, 1927; the Horus Brooch of ancient Egyptian faience, emerald, coral, onyx and diamond, Paris 1925; the carved jade, ruby and gold belt sold to Ganna Walska, London, 1930; and the Doris Duke Tiara of diamonds and pearls, New York, 1924. One might say that Cartier’s innovative spirit was responsible for ushering in the art deco period.

True to form, the 1930s jewelry from Cartier continued to challenge design. Jewels were becoming more sculptural, and we see the introduction of the flower motif. Two floral diamond and platinum examples are represented in the Cartier Collection: the Rose Clip Brooch, London 1938 (given to Princess Margaret, whose middle name was Rose), and white gold bangle with detachable flower clip brooch, Cartier, Paris in 1939 (formerly from a member of the Romanian Royal Family). 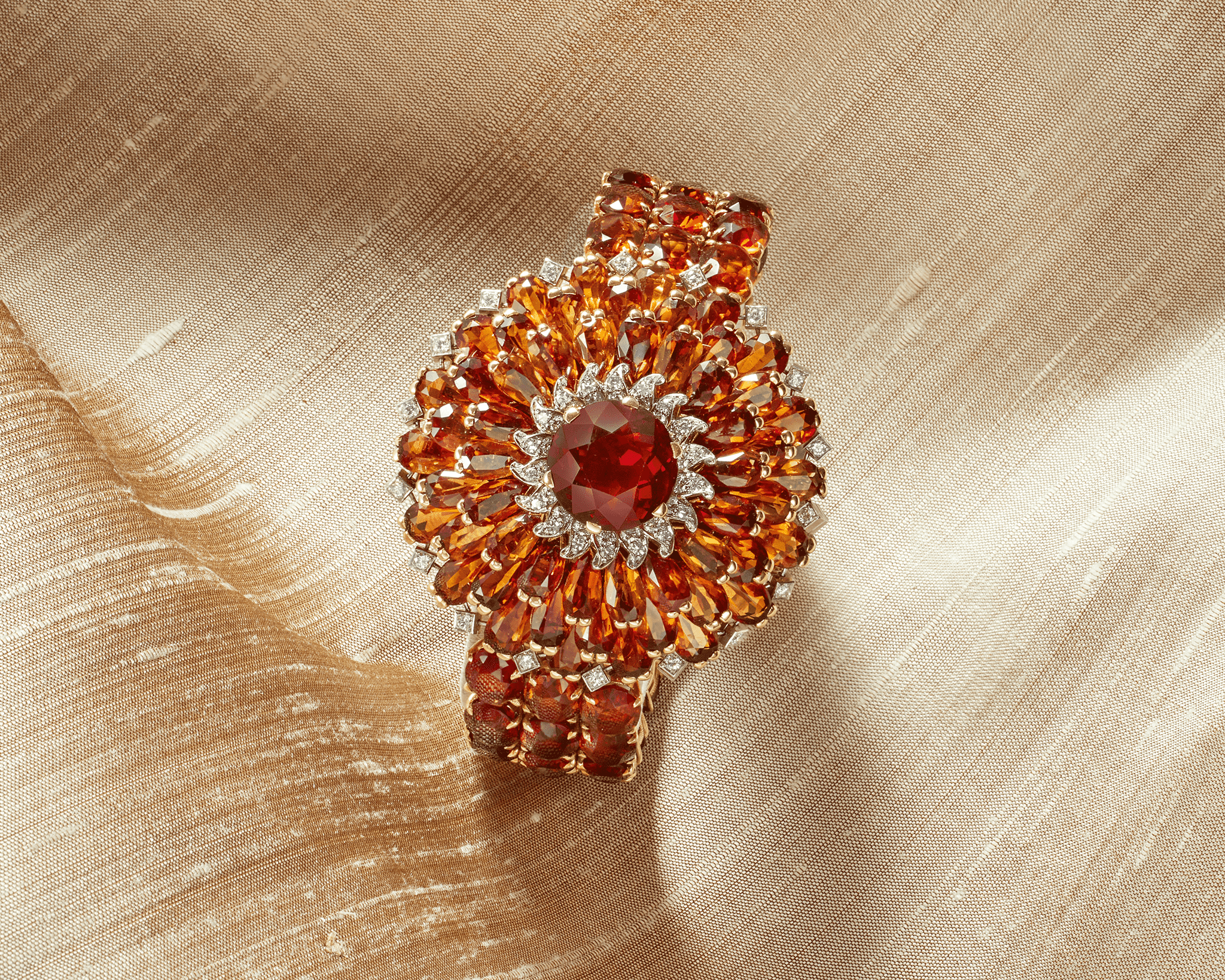 This Cartier citrine, diamond, topaz and gold dahlia clip/bracelet is an important jewel.  It stands as an example of what Francesca Cartier Brickell, author, historian, and a direct descendant of Cartier, described as the Cartier tenet “‘Never copy, only create’.

Undoubtedly, Cartier did not create many of these complex designs…. this may, in fact, be the only one of its kind.

This dahlia flower brooch is three dimensional, it mimics the form of a domed flowerhead.  Each pear-shaped citrine petal is individually mounted and joined to a wire frame so that the petal can move independently. Worn as a brooch, this unique feature allows the flower to follow the contour of the body; therefore, placed at the curve of one’s shoulder, the petals will naturally fall into place. The only prior articulated example found was created in 1931 by Cartier Paris, and featured in a Harper’s Bazaar editorial, “A diamond head ornament has a flexible flower and leaves as a forehead piece.” The creation and execution of movement is an engineering feat. It requires precision and patience to cut matching gemstones, create and assemble a finished jewel.  All must understand, communicate, and create in harmony - designer, lapidary and master jeweler for the outcome to be successful. Designing and executing a flower clip with articulation was innovative, and extraordinarily difficult to master, hence, few were made, and even fewer are extant. This exceptionally rare example is indeed a “genius” technological masterpiece.

Undoubtedly, Cartier did not create many of these complex designs…. this may, in fact, be the only one of its kind. Therefore, it is highly likely that this citrine, topaz and diamond clip bracelet was a special order for a very important client.  Based on the history, design, and London signature, we attribute this jewel to a collaboration between Peter Lemarchand, a talented Parisian artist, known to have a fondness for flowers and dahlias, and London designer Frederick A. Mew whose creations tended to be more geometric and architectural.  The London workshop was inundated with work, and to help, Peter Lemarchand was transferred there in 1935. While their styles were slightly different, the dahlia clip brooch bracelet clearly exhibits their hybridized imprimatur.

It is worth noting that it was Frederick Mew famously designed Queen Elizabeth’s Williamson Pink Diamond Flower Brooch in 1947. The thought being that Lemarchand brought the concept of flexibility and his love of dahlias and Mew, the construction and form, undeniably a potent collaboration.

This Cartier special order much like the Dahlia, embodies commitment, elegance, dignity, and beauty, for whomever is to be the next very important client. 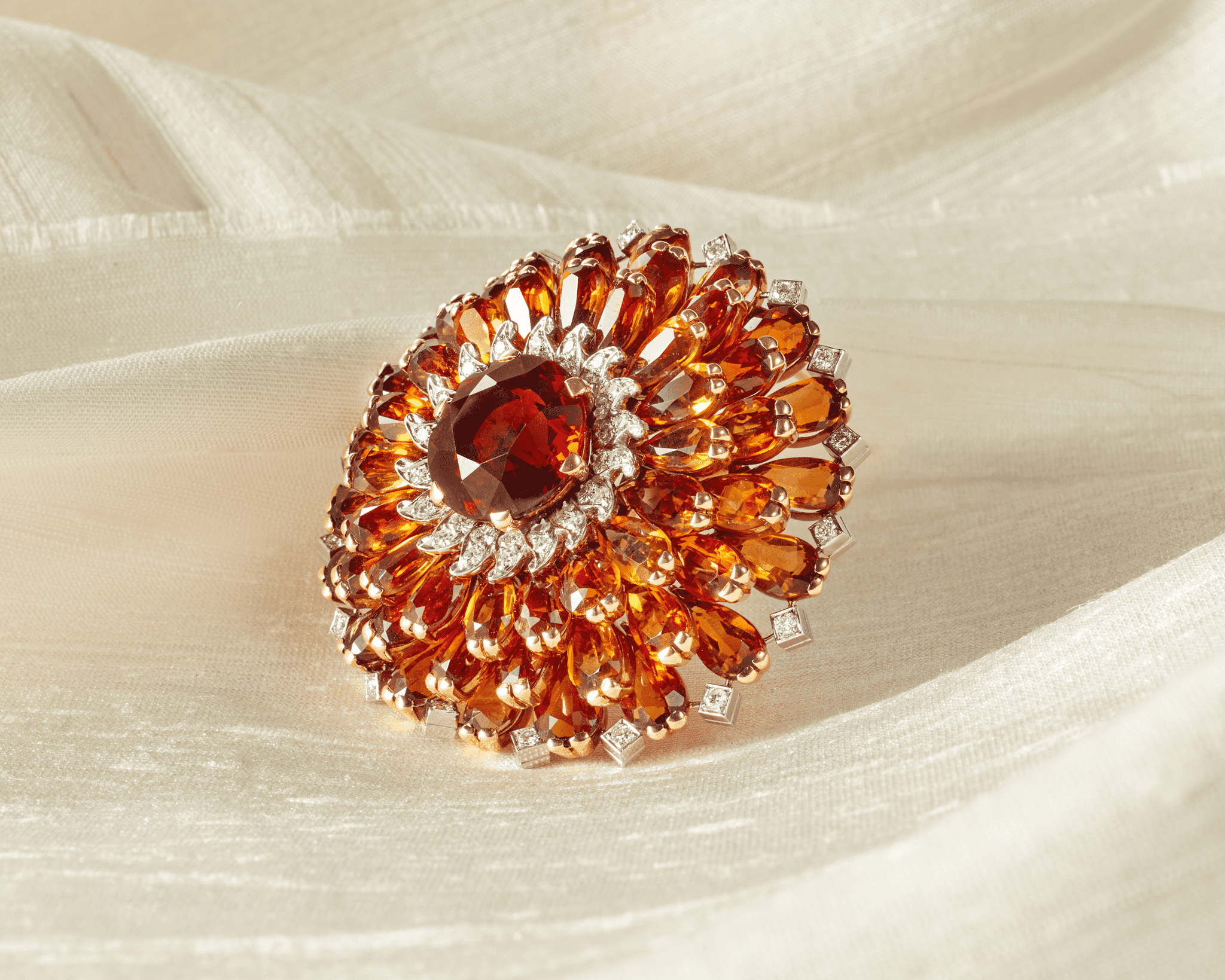